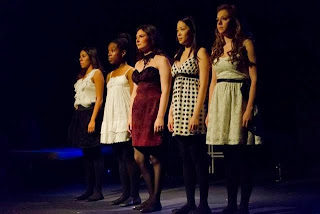 I will be volunteering tomorrow night October 17th and Saturday, October 19th, for the production of Shadow Town at the Her Story Theater. Shadow Town is a compelling play about sex trafficking here in Chicago.

Will you join me? I will be representing The Dream Catcher Foundationwhich is a non for profit organization that services girls ages 12 to 24 who are at risk or currently in Human trafficking. The proceeds from the ShadowTown performances will benefit The DreamCatcher Foundation along with the The Salvation Army- PROMISE program established Anne's House, which provides long term residential care for sex trafficked girls, ages 12-21.

There is a Q & A after each performance. Each performance has a different Chicago notable who performs the role of Samantha's parent, (Samantha is the child from Naperville who disappeared from a connection she made on the internet followed by her parents frantic search for her), along with a celebrity singer opening the show, followed by a reception where the singer performs for that night's audience in the comforts of the theaters lounge. Below is a full list of celebrity appearances:

You can buy your tickets by clicking here.

3 hours of free CEU credits are applicable to all 24 performances, complements of the Graduate School of Social Work at Dominican University.

Shadow Town in the media:

"The plight of women in prostitution has always captured our attention. We've seen plenty of plays, movies and books written about and by women of the streets -- all usually through a dreamy vaseline lens.

Now comes to Chicago Shadow Town, a play by Mary Bonnett, artistic director of Her Story Theater, a theater for social change. Bonnett's production aims to blow the fog away to reveal a bracing portrait of an ugly world forced upon innocents, some 11 years old or younger."

"I first heard about human trafficking 25 years ago, while working on a documentary about kids in Uptown, a poor Chicago neighborhood. When I asked a young mother about her kids, she said, "The oldest is gone. She was only twelve. They shoved her in a car and took her away. White slavery, that's what it is."

What? I didn't know how to prove or disprove this. My documentary was about something else, so I filed it under "Things I Don't Understand."

"We're taking a closer look on who these women are," Lake County Sheriff John Buncich recently said. "They are not just prostitutes on the street. They came from somewhere, they belong to someone. There's a story behind these girls."

Mary Bonnett, a 60-something Chicago writer and producer, artistic director of Her Story Theater, is telling some of those stories now.

She wrote and is producing a play, Shadow Town, featuring four girls’ journeys into ‘the life.’ The little girl I remember from Uptown could be one of them. But she's probably dead. According to the American Journal of Epidemiology, the average lifespan of someone in prostitution is 34, with violence and drugs the predominant causes of death."

"But with a production as interwoven with a cause as this one, the acting isn’t nearly as important as the brutal subject itself. Proceeds from the play benefit The Salvation Army PROMISE program and its residential care facility, Anne's House, as well as the Dreamcatcher Foundation; local experts who work with sex trafficking victims are on hand for a Q&A after each performance; and a rotating roster of different Chicago musicians and notables—from news anchors to state’s attorneys—take on two guest roles each night, generating even more buzz about an oft-overlooked issue that deserves the long, hard examination it gets here. It’s an effective approach, to say the least."

Are you reading this on a mobile device? Scroll down and click “Web Version” to see more content and info.
Thank you for visiting!
Posted by Angela Mayah Solstice at 11:44 AM

Email ThisBlogThis!Share to TwitterShare to FacebookShare to Pinterest
Labels: #events