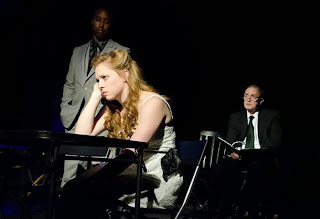 I will be volunteering this Saturday, November 2nd  for the production of Shadow Town at the Her Story Theater. Shadow Town is a compelling play about sex trafficking here in Chicago.

Via Her Story Theater FB:

Don Rose is a political columnist and the former press secretary of Martin Luther King. He came to see SHADOW TOWN last Saturday night and this is what he wrote in his column today. Thank you, Don, we are very grateful. SHADOW TOWN has 3 more weekends, we hope you'll join us. www.HerStoryTheater.org

"...More on changing from an appointed to an elected board in forthcoming columns, but I must take a moment to comment on a riveting new play, written and directed by Mary Bonnett, dealing with the rarely exposed but horrific topic of sexual trafficking in Chicago--a contemporary slavery that holds Asian immigrants, vulnerable local black, Latina and even white suburban children in medieval bondage.

I expected Shadow Town to be a typical, didactical rendering of a huge social problem. What I found instead was a compelling, maturely written and beautifully acted play with caustic use of music and dance that’s Brechtian in concept, sucking you in then alienating, then bringing you in again to the story of four girl-children and how they descended into “the life” of prostitution.

Our guide is a satanic super-pimp who introduces himself as “a man of wealth and taste,” then becomes a sardonic Virgil leading us down through his hell in 10 lessons, mixing sweet-talk, beatings and murder. Rashawn Thompson is magnificent in the role.


Will you join me? I will be representing The Dream Catcher Foundationwhich is a non for profit organization that services girls ages 12 to 24 who are at risk or currently in Human trafficking. The proceeds from the ShadowTown performances will benefit The DreamCatcher Foundation along with the The Salvation Army- PROMISE program established Anne's House, which provides long term residential care for sex trafficked girls, ages 12-21.

There is a Q & A after each performance. Each performance has a different Chicago notable who performs the role of Samantha's parent, (Samantha is the child from Naperville who disappeared from a connection she made on the internet followed by her parents frantic search for her), along with a celebrity singer opening the show, followed by a reception where the singer performs for that night's audience in the comforts of the theaters lounge. Below is a full list of celebrity appearances:

You can buy your tickets by clicking here.

3 hours of free CEU credits are applicable to all 24 performances, complements of the Graduate School of Social Work at Dominican University.


Are you reading this on a mobile device? Scroll down and click “Web Version” to see more content and info.
Thank you for visiting!
Posted by Angela Mayah Solstice at 12:12 PM

Email ThisBlogThis!Share to TwitterShare to FacebookShare to Pinterest
Labels: #events