Mary's House, a safe house for women, has grand opening 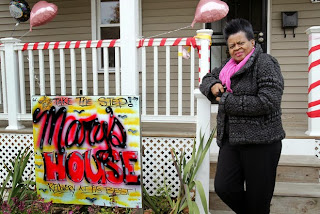 Janice Chambers believes the women who died on Imperial Avenue did not get the help they needed.

The thought that someone could have saved them came back to her again and again.
She knew she had to do something.

Chambers is a chemical dependency specialist and project director at Cleveland UMADAOP, Urban Minority Alcohol and Drug Abuse Outreach Programs. A group of women she directed there talked about the murders, reliving their own hard times; memories triggered by the deaths of women who could have been their sisters, neighbors, friends.

The women gathered weekly and talked about what they could do to help other women at risk of becoming victims.

As she thought about a solution, Chambers stared at the abandoned home across the street, boarded up and ignored, just like the women who perished at the hands of Anthony Sowell.

And that's when she knew what they had to do. They had to buy that old house. Rebuild it. And make it a safe house for women who need a hot shower, a meal and a little help putting their lives back together.

On Monday, nearly three years after those meetings in February 2011, the house officially opened its doors.
Read more here.
Via: www.cleveland.com


Are you reading this on a mobile device? Scroll down and click “Web Version” to see more content and info.
Thank you for visiting!
Posted by Angela Mayah Solstice at 6:49 PM

Email ThisBlogThis!Share to TwitterShare to FacebookShare to Pinterest
Labels: #Empowerment